Types of Evidence in Criminal Cases 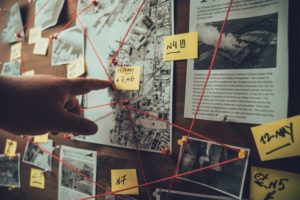 A post here earlier this month reported on an audit in the Orange County Sheriff’s Department about evidence in criminal cases being improperly booked as evidence. A second audit has reportedly found that in 57 cases sheriff’s deputies had not booked evidence in criminal cases, even though they reported that they had done so. The Orange County District Attorney’s office is now working to determine if any of the defendants may have been wrongly convicted because evidence was not handled properly.

Evidence is critical to entire system of justice. “Evidence” is the body of facts and information surrounding a crime. It is collected during investigation and used throughout court processes to prove or disprove a suspect committed a crime. It usually consists of things like physical objects, witness accounts, electronic communications, forensic findings, locations, written documents, but there are many types of evidence.

In criminal cases these many forms and categories of evidence, are each treated by the courts, or considered, differently during trial. Some cannot be used in court at all, and others forms are highly persuasive to judges and juries.

Any Law and Order or courtroom drama fan has undoubtedly heard many of the terms associated with evidence, but defining a few major categories is helpful to understanding how crucial and fundamental a role evidence plays in criminal justice.

Within these major evidence categories below almost all evidence takes one of four forms:

Admissible evidence are any materials the court finds can be used and formally presented during a trial to help prove or disprove some fact associated with the alleged crime. To be admissible the evidence must be relevant to that particular case and it must be material, meaning it has a direct relationship to the facts of the case and is likely to affect the determination of the case. The judge decides what is admissible during a trial.

Materials or information that cannot be used in court as credible evidence against an accused person is “inadmissible.” What evidence is inadmissible is sometimes not as clear-cut as the standards of “relevant and material” may seem for admissible evidence.

Evidence may be deemed inadmissible by a judge for a variety of reasons. Material that is improperly gathered or handled during law enforcement investigation is often deemed inadmissible, because its credibility comes into question. When evidence is mishandled defense attorneys can petition the court to “suppress” it so that it becomes inadmissible and cannot be presented during trial.

Information that is “prejudicial” or that may confuse or bias the jury may also be judged inadmissible.   Evidence that is misleading or that wastes the time of the court, or that is considered “privileged,” such as communication between an attorney and client, are also reasons certain materials may be judged inadmissible in a criminal trial.

This kind of evidence shows the guilt or involvement of the accused in a crime. It is often referred to as “incriminating” evidence. Inculpatory evidence is usually favorable to the prosecution’s case against a suspect.

Exculpatory evidence are facts and circumstances favorable to the defense. In other words, it can be used to exonerate or show the innocence of the accused.

Prosecutors have a legal duty to advise defense attorneys and the court of all exculpatory evidence found during investigations or held by law enforcement.

Circumstantial evidence is some type of information that does not directly prove guilt. Typically it is evidence around some fact that would lead a person to “reasonably conclude” that a key fact is indeed true.

For example, testimony from someone also involved in the crime with the defendant is direct evidence, but a neighbor seeing someone at or near the crime location matching the description of the defendant only indirectly supports the guilt of the accused.

The burden is on the prosecutor to prove every fact beyond a reasonable doubt, and if the jury cannot reasonably conclude that all evidence, direct and circumstantial, proves guilt, they must find the defendant innocent.

David A. Stein is a distinguished criminal defense attorney and trial lawyer.   He has a track record of successfully defending violent crime, white collar crime, and juvenile cases, often getting charges dismissed or winning acquittals after jury trial.  He is available for a no-cost consultation on any criminal matter.  Call today at (949) 445-0040 or email us confidentially online here.