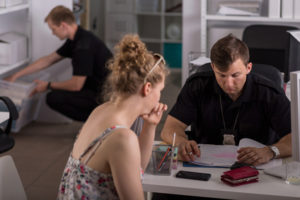 If you think you are under investigation for a crime, hire an attorney.

Of course you would expect a defense attorney to say that, but here’s why: your defense lawyer may be able to prevent charges from ever being filed against you.

Most crimes have a long statute of limitations, or for very serious crimes none at all, giving law enforcement and prosecutors plenty of time to investigate and build a case before making an arrest. It may take several months or even years for police to complete an investigation.  This can be a critical time in preventing an arrest on criminal charges.

With most crimes the criminal process starts well before anyone is arrested. Because law enforcement doesn’t directly witness the crime happen, the crime must be investigated. Police must look into what happened, the circumstances surrounding the crime, and the people who may be involved and under suspicion. They are looking for sufficient evidence against someone to make an arrest.

This phase of the criminal process is called the “pre-file” investigation. It is the process of investigation that law enforcement goes through when they suspect someone of a crime, but before formal charges are filed or an arrest is made for the crime. Pre-file investigation is when physical evidence is collected, and victims, witnesses, and suspects are interviewed.

What to Do If You Think You Are Being Investigated

Typically investigators contact you. They want to question you. They may ask to search of your property. They are interested in getting a confession or building a strong enough case against you that they can recommend the district attorney file formal charges against you.

What you say now during a pre-file investigation interview can wind up being the key to the case against you. Say as little as possible. Be polite. Ask that your attorney be present before answering any questions. Even if you have not been arrested, you still have the right to decline to answer questions without your attorney being present.

Even if you just want to explain your side of the story because you are innocent, rely on your lawyer to speak for you. Remember anything you say before being arrested can be used as evidence or interpreted against you after you are arrested. But statements made by your attorney cannot be used against you.

It is legal for police to bluff or lie to get information. Investigators often ask questions they already know the answer to. It is easy for you to inadvertently say something that helps them confirm an assumption that they have already made about you.

Letting an experienced attorney speak for you means you could have more options available to you if you need to build a trial defense. Statements you make without an attorney during the pre-file investigation can lock you into a defense scenario later on instead of giving you and your attorney the ability to capitalize on additional defense options for you.

Preventing Criminal Charges from Being Filed

During the pre-file investigation your attorney can shield you from law enforcement questioning, or if you are questioned will advise you during the questioning.

Your lawyer will make sure your rights are protected during the investigation, and will monitor the process used by law enforcement to gather evidence against you. If evidence is improperly collected, your lawyer can move quickly to get certain evidence suppressed.

Your attorney will conduct a review of all the evidence. If there are inaccuracies, your defense attorney will work to have them corrected. Your lawyer may conduct an independent investigation of the crime and be able to find favorable witnesses or evidence that supports your innocence. Having this additional evidence can show police there is no case against you or that their evidence is insufficient to win the case.

Prosecutors often plan to file multiple charges in cases to ensure that at least one will stick and not all charges get dismissed or negotiated away. An experienced defense lawyer may be able to convince prosecutors not to file multiple charges. This increases the chance that the remaining charges can get reduced or be dismissed. Your attorney may be able to get a potential felony charge from being filed in favor of a misdemeanor, keeping you out of court and/or jail.

If you think you are under investigation, don’t wait until you are arrested to hire an attorney. Having an attorney on your side during an investigation can improve your chances of a better outcome.

The Law Offices of David A Stein, located in Irvine, offers pre-file advice and intervention for suspects of any criminal matter in Orange County.   Call today at 949-445-0040 for a no-cost consultation if you think you are being investigated. Or send us a confidential email online.