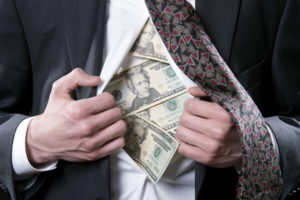 After agreeing to a court offer, former financial services manager for the city of Placentia, Michael Ming Nguyen, was sentenced this month to 25 years in prison, $10 million in fines and $2.6 million in restitution for embezzling more than $5 million from city coffers.

Nguyen was originally facing 105 felony counts and nearly 98 years in prison plus $10 million in fines. He was accused of 36 counts of misappropriation of public funds and 65 counts of money laundering. According to records, he made 36 wire transfers from a city account to his own accounts and to the accounts of other recipients.

One of those other recipients is apparently high-stakes gambler, Michael McDonald. The embezzlement crime came to light when he allegedly asked employees of a Las Vegas casino to accept a wire transfer from the City of Placentia, telling them the money was for a film production project he was working on for the city. Casino employees were suspicious and notified the IRS. It was the criminal investigator at the IRS that called the city and alerted officials to the wire transfers into McDonald’s account.

After that call, Nguyen told city officials he didn’t intend to steal money from the city, but was using it to make investments “on the side” and that he always paid the money back. Nguyen estimated that the wire transfers amounted to about $3 million but that he had not paid any of that money back. The apparent total was more than $5 million.

This week, the managing partner of Talaton Group, a financial services company in Beverly Hills, was arrested for helping Nguyen launder more than $1 million of embezzled city funds. He has been charged with 28 felony counts.

The Las Vegas suspect, McDonald, is accused of laundering more than $750,000 of city money, but has not yet been arrested.

Embezzlement is typically employee theft of money or company assets. However, embezzlement also can apply to circumstances outside of a business setting such as a relative entrusted with handling a family member’s financial affairs who uses the money for personal gain.

While embezzlement is a type of theft, under California law there are three key factors prosecutors must show for you to be found guilty of the crime of embezzlement:

The monetary value determines whether the embezzlement is a misdemeanor or a felony. A “petty theft” involves value of $950 or less, and is generally a misdemeanor. “Grand theft” involves money or property valued at more than $950. Grand theft is a “wobbler” in California, meaning it can be filed as either a misdemeanor charge or a felony charge, depending on the circumstances surrounding the case and whether you have a prior criminal history.

Penalties for a misdemeanor are a maximum fine of $1000 and up to a year in county jail. Felony grand theft penalties may be up to 16 months or two or three years in state prison, up to $10,000 in fines, and possibly the addition of restitution payments to the victim. In Nguyen’s case of multiple felony charges, the court required payment of $2.6 million in restitution in addition to his $10 million fine.

An experienced embezzlement defense attorney will know how to negotiate to potentially reduce charges from a felony to a misdemeanor, or will be familiar with legal defenses surrounding the three factors that legally define embezzlement. For example, there may not have been intent, or there may have been a misunderstanding about the use of the property.

The white collar crime of money laundering is aggressively prosecuted and punished and often involves a federal crime and the FBI. In simple terms, money laundering is a process that attempts to disguise an illegal source of money so that it appears to come from a legal source. In the Nguyen case, he wired money into other people’s accounts with the intent to disperse the money for his personal gain from those accounts, hoping to conceal the legal owner or source of the funds.

You can be charged with money laundering if you accept or process funds you knew were illegally gained.

A single felony conviction for money laundering in California can mean penalties of a fine of $250,000 or twice the value of the stolen property, whichever is greater, and up to three years in state prison.

Being charged with embezzlement or money laundering is serious. A criminal attorney who specializes in white collar crime defense and has relationships with Orange County prosecutors and courts is essential to helping you get the best defense and outcome. The attorney will be familiar with your best possible legal defenses, negotiating reduced charges and possibly avoiding a criminal record, and / or getting your penalties reduced.

David A. Stein is skilled criminal defense attorney with a track record of obtaining very successful outcomes for his clients. If you have been accused of a crime or need help with any criminal matter, contact our law offices today at (949) 445-0040 for a consultation.or contact him online by email here.